It took me really long to give Unity3D a chance. Even though I knew it would make a good job I always wanted to create my own framework based on jMonkeyEngine. Hey, I’m a coder… Actually I came quite far but still there were millions of issues. But now that I agreed to help students in creating games upcoming semester (e.g. with Unity3D) I have a better cause to neglect my programmer’s dislike about one of that all-in-one-babies.

And first to say, still nothing can be done without scripting

Until now I worked thorugh the 3d and 2D Platform games and watched one “How to make a car game”-Tutorial:

After  working through all this three tutorials I felt ready to start with something on my own. I created a small world with some free to download models, my dummy animated guy and a nice terrain I modeled in Unity3d and painted on it with splatting-painting. I created the lightmap with blender which was only possible cause I found some cool scripts that let you export the scene and terrain as OBJ. The movement-script is made from scratch by me (therefore it is of this poor quality yet). Actually I found out that realtime-shadow is only possible with the Unity3D Pro versions so I had to be happy with the projected “Blob-Shadow” for now. I added a small Unity-based animation for the wind mill. Actually I’m not so sure about how the movment and MouseOrbit-Look around the Character should work. For now you steer the guy like that:

awsd or keys for movement

mouse for looking around (mouse-wheel to zoom in and out)

Have a look here: 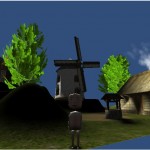 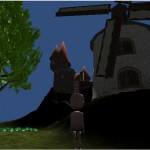 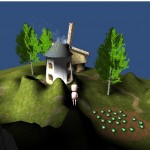 Just arrived from mainz from attending devmania doing the overnight-contest with my globalgamejam-companion burak. This time we decided to use Unity3d instead of the beloved jMonkeyEngine. We started at about 6pm and more or less finished 9am without sleeping. There were some problems with

Well, 2 Weeks ago I participated in a game-coding-project at Trier. Some students of ‘University of Applied Sciences’ organized the week with the goal to finish a multiplayer 2D Shooter. They (Robert and Tobi) provided a good framework based on Slick2D to start with